I wanted to start learning Python, so I tried to build an environment. The content of this article is a memo of the work I did. The OS of the laptop I am currently using is Windows 10 64bit. This article is an example of how to build the environment for Windows.

I decided to try Python and did some research on the net. It seems that there are various execution environments. I found out that one of them is called Anaconda. It seems to take about 3GB of disk space to install. It seems to be this size because various packages are bundled together.

After further investigation, I found Miniconda, which is the smallest package included in Anaconda. This time, I decided to install this.

You can download the installer for Miniconda from the following site.

A file named “Miniconda3-py39_4.9.2-Windows-x86_64.exe” was downloaded. We double-clicked on it to start the installation.

During the installation, there is a part where you can choose between the following two users.

This time, we chose “All Users”. By default, the top one was selected, but since I don’t use the system to make detailed settings for users, I chose the bottom one.

After completing the installation, the following two items have been added to the Start menu.

Right-click on “Anaconda Prompt” and select “Run as administrator”.

At the above prompt, I typed the following

Other packages were installed, and “C:\ProgramData\Miniconda3” is now 893 MB.

When I looked at the Start menu, I saw that “Anaconda Navigator” had been added. After checking the version, it showed “anaconda-navigator 1.10.0”. Probably, the latest version was installed.

To create a virtual environment, I started “Anaconda Navigator”.

I clicked on “Environments” in the list on the right, and a list of virtual environments was displayed.

I clicked on the “Create” button at the bottom. 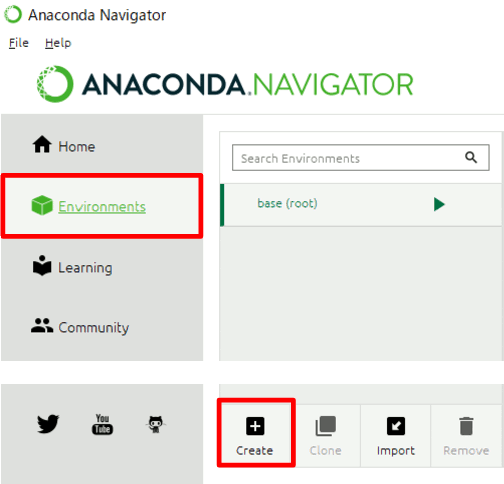 When the dialog box appeared, I entered “test0001” in the [name] field and clicked the [Create] button. 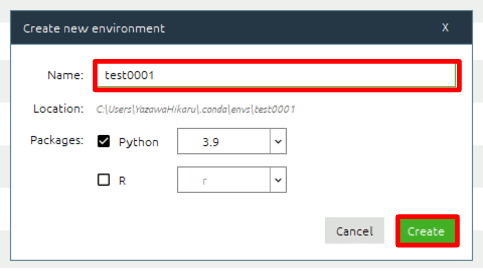 Now we have a new virtual environment called “test0001”.

The following packages have been installed.

We will not consider the details of the above configuration in this article.

In order to run Python programs in the above virtual environment, we will install the integrated development environment PyCharm Community Edition.

We did some research on the Internet and found that PyCharm is a popular integrated development environment. We decided to use the free version this time. The installer can be downloaded from the following site.

A file named “pycharm-community-2021.1.exe” was downloaded. We double-clicked on it to install it.

On the way, we checked the [Create Desktop Shortcut] option. This automatically created a shortcut on my desktop.

A shortcut named “PyCharm Community Edition 2021.1 x64” was created. Double-clicking on it brought up the “Welcom to PyCharm” screen.

We clicked on [New Project].

The [Location] seems to be the location where the project will be saved. We named the last folder “pythonProject0001”.

For [Python Interpreter] we selected the virtual environment we created above. We did the following (maybe)

The settings are now set to select the virtual environment.

In this state we clicked on the Create button.

Right-click [pythonProject0001] on the left side of the screen and click [New]->[Python File] in the list that appears.

In the dialog that appeared, we typed “test0001” and pressed the Enter key.

A new file named test0001.py was created and is now open on the right side.

We typed the following and overwrote and saved the file

The console of the execution result is displayed at the bottom of the screen, and “Hello World” is output.

This accomplished our goal.

Articles next and previous in the same category

next
Python | Learning the parameters of the print() function

Recent Articles In The Same Category